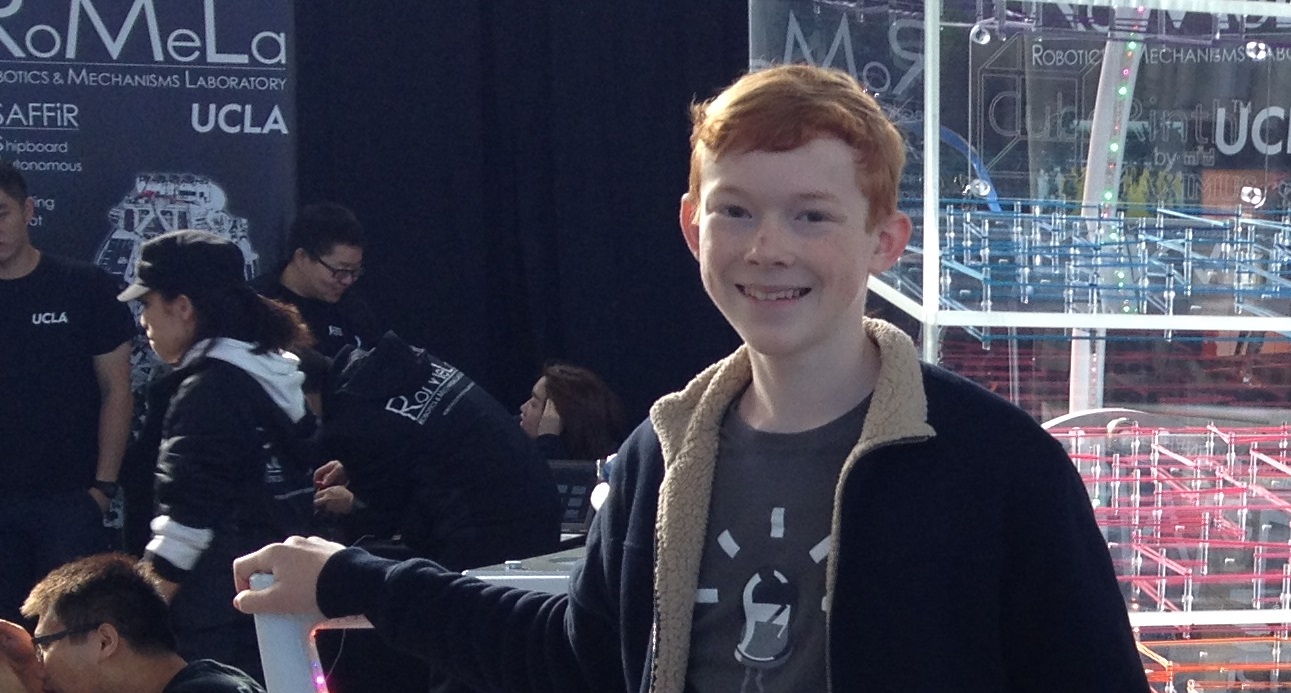 Reagan Gillespie: Enterprising home-schooler takes on the future of making

Reagan Gillespie is a homeschooled, 14 year-old Maker, CAD designer and 3D printer enthusiast.  He enjoys working with electronics and coding as well. He was introduced to CAD design at the age of 12 by using SketchUp.  He then started using Autodesk Inventor and is now using Autodesk Fusion 360. With his younger brothers, he created the CubeRinth, a 3D acrylic maze kit, which he designed using Autodesk Inventor. Recently, he and his brothers built a large version of the CubeRinth called the Maximus, a 4'x4' 3D acrylic maze for TwoBit Circus.  Reagan also created a CAD designed conference table that won a Local Motors hackathon contest and was 3D printed on their BAAM (Big Area Additive Manufacturing) 3D printer for use at Local Motors headquarters, and a rear wheel steering, front wheel drive electric bike called the Speederz Concept Bike. He is currently working on an SLS Printer called RayvenOne for the home and small business market.

You have such an interesting background. Please tell us about yourself and what got you interested in design and 3D printing?

I have always been interested in making and creating things. I started using mostly Legos and Snap Circuits. I made a working, mechanical Lego calculator that used gear ratios to do addition, subtraction, multiplication and division! About a year and half ago we read a story in a local magazine about a young boy like me in our community who liked inventing and making. That person was Joey Hudy of the famous Marshmallow Cannon, the one that was shot in the White House during a science fair. I instantly wanted to meet him. My parents took my brothers and I to a local Maker Faire, where we met Joey and his mother, Julie Hudy.  Joey taught me how to solder for the first time at his house.  It’s also where I first experienced what a 3D printer could do with the MakerBot 2nd Generation and the Afinia printer. I really enjoy the idea of being able to print what I design. 3D printing has allowed me to learn about the design process from the stand point of concept, engineering and prototype. I’ve been able to utilize my 3D printer, the Ulitimaker 2 in many of my projects.

Can you tell us more about your design process?
For the actual design process, I have an idea notebook that I carry around wherever I go. Whenever I get an idea, I write it down. I compile all the ideas into rough, hand drawn sketches, and then use the sketches as a reference for my CAD designs. Then I consider what, if any, limitations there are in the process of building what I am designing.  Once I start CADing, I begin with a basic model that encompasses all of the design’s components. Then I refine it, adding tolerances, making all the joint relationships line up. What Fusion 360 allows me to do is create a model which when finished in the real world is exactly what I designed. For example, when building the Maximus, because of its size and complexity (over 213 versions and 120 Hours of CAD work), not to mention a 6 week build window, it was very important that the parts I modeled in Fusion fit together like they would when they were fabricated. Another example, when I approached the design process for the 3D printed conference table for Local Motors, I needed to consider what their BAAM 3D printer could do and incorporate that into my design while achieving the aesthetic look I wanted. I couldn’t do any overhangs over 45 degrees, no bridging, and no walls thinner than twice the extrusion width. So sometimes real world building limitations will impact my design process. 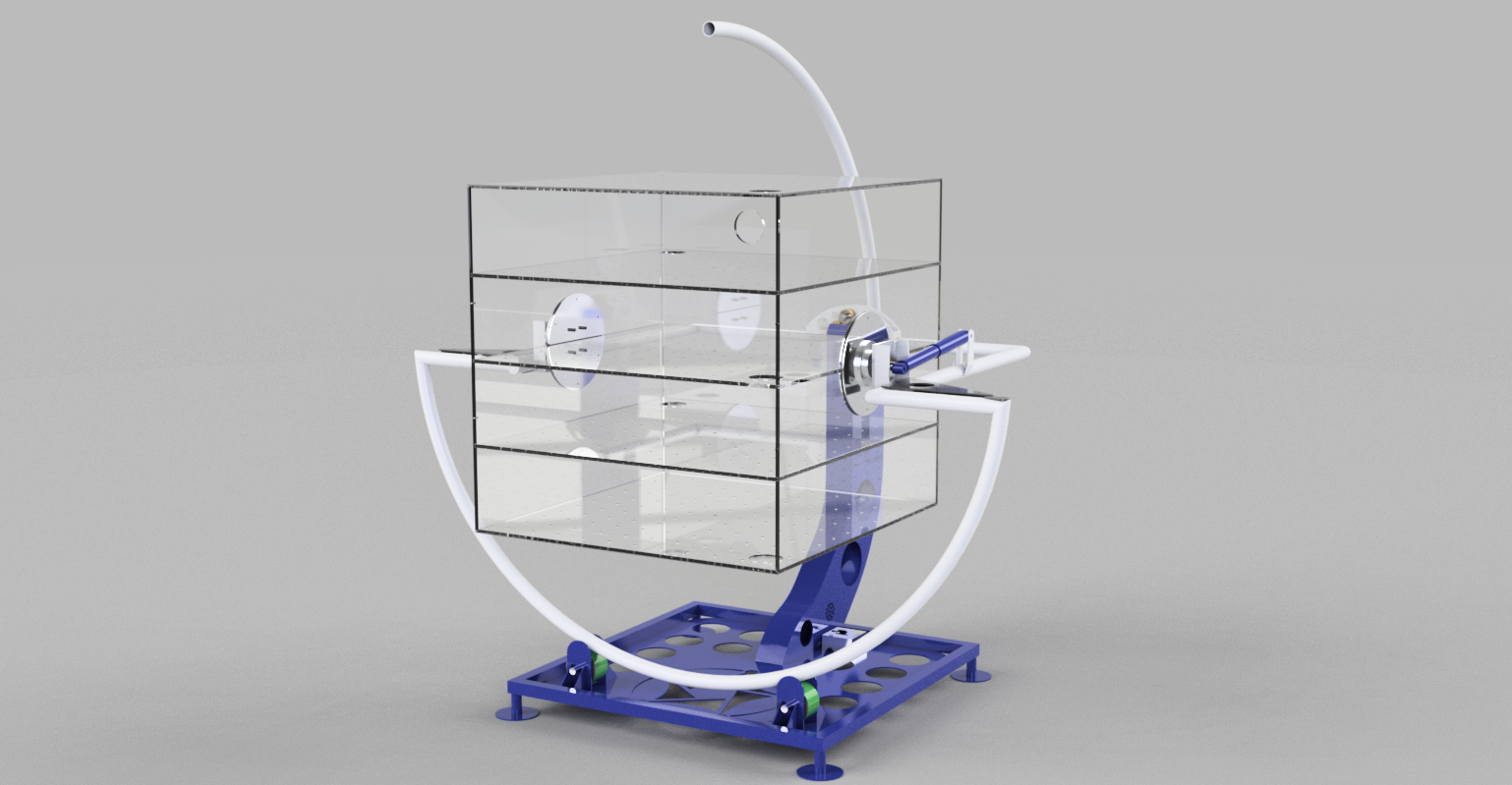 Fusion 360 render of the Maximus, a large version of the Cuberinth puzzle.

What's your favorite part of the design process and why?

I really enjoy the actual fabrication work for a project and getting my hands dirty.  Seeing what I have designed in CAD come to life is really great. Today, there are a number of makerspaces like CREATE at the Arizona Science Center and the Local Motors Labs here in Phoenix where I can go to make. No matter how hard the fab work is, I love it! Next in the favorite list would be aesthetics and the mechanisms in design. Especially the mechanisms and how they work. Each component doing its part to make the whole project, in precision with every other piece.

What types of activities do you do?

Other than designing, fabrication, and making, I’ve been involved in Kung Fu for a few years now and enjoy it. I really enjoy working with the Dao Sword and the gymnastics. Also, I enjoy riding my bike and being outdoors. As for an inside activity, I'm writing a near-future sci-fi novel with lots of drones, 3D printing, and dragons who are engineers. I'm not disclosing the plot just yet, but the name of the book is Aspirant.

We'd love to see your work examples. Can you share a past and current project?

We built the CubeRinth Maximus for Two-Bit Circus/STEAM Carnival. The CubeRinth Maximus, super-sized version of our CubeRinth Kits, is a three dimensional maze constructed using 1/2 inch acrylic sheets and features top and bottom peg boards as well as three removable pegboard shelves. The Cube weighs approximately 480 pounds and is suspended by a steel structure that allows the Cube to move in all directions. The Maximus is played by dropping a ball at the top of the maze navigating through each level to the bottom maze and then the Cube is rotated 180 degrees and the ball is navigated back to the top level. The Cube features 10 meters of NeoPixels. We had about 6 weeks to complete the Maximus build. I spent about 120 hours doing the CAD design work in Autodesk Fusion 360, complete with over 200 versions and roughly 75 renderings of the CubeRinth Maximus.

Also, I designed a conference table for Local Motors to be printed on their BAAM (Big Area Additive Manufacturing 3D printer). My inspiration for the conference table and chairs came from playing with Legos. The chairs are inspired by the Lego concept of building blocks; putting blocks together, taking them apart and creating something new again. The chairs use a bracket and pin construction that allows you to assemble and re-assemble for ease of storage. The bracket and pin can be used in conjunction with other designs as a way to assemble without the use of screws or other hardware. The supporting structure for the conference table has a triangle pattern to increase strength and decrease weight and printing cost while giving the table an industrial look.

I've also been working on a 3D printer; an SLS 3D printer to be specific. It's called RayvenOne and I aim to make it an affordable, high-speed SLS 3D printer for homes and small businesses! My goal is that some of the improvements I’m making to the standard SLS printer design will increase speed, decrease cost of components, and improve usability.  The CubeRinth Maximus, the conference table, and RayvenOne were all designed using Fusion 360. 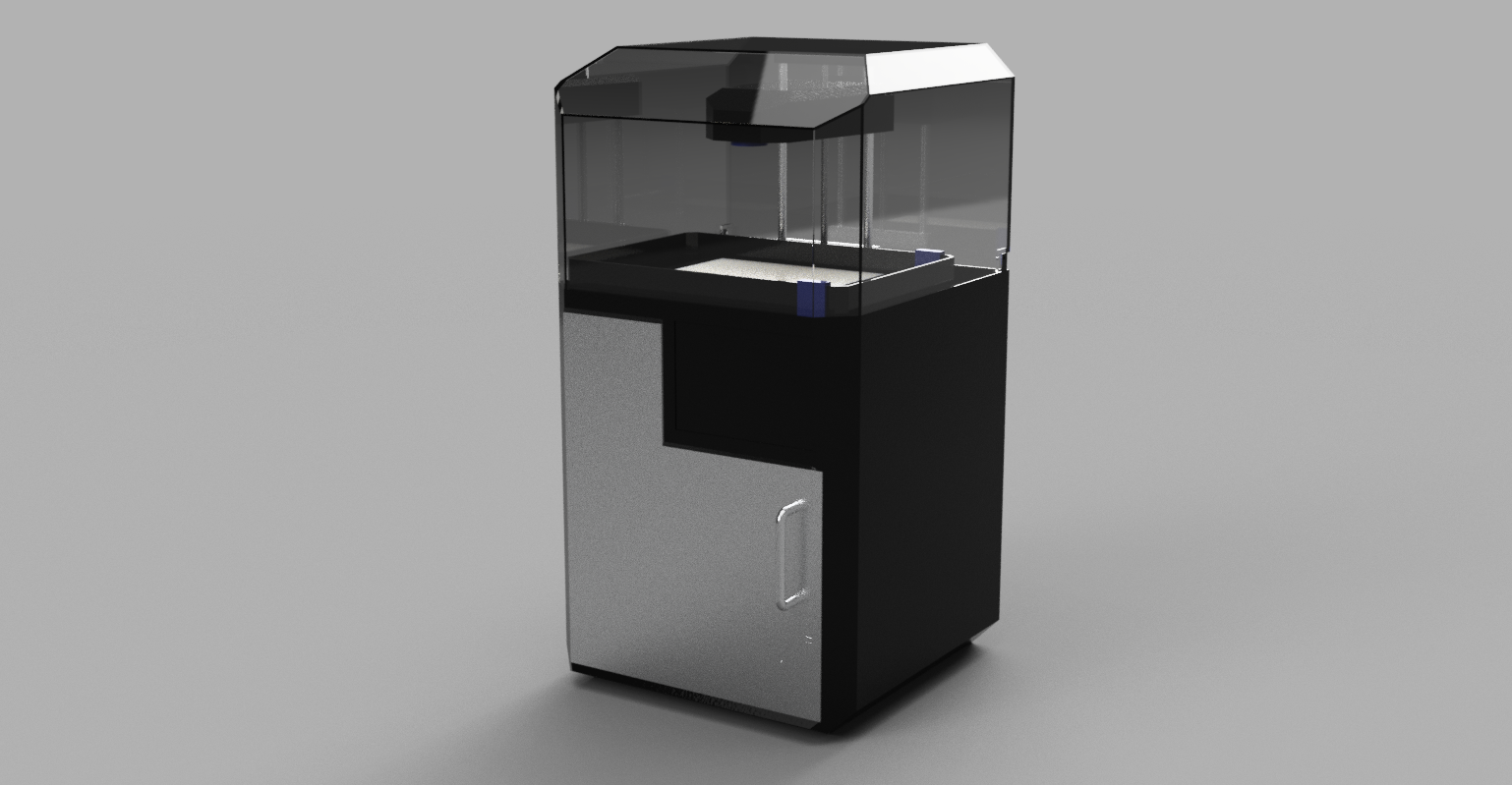 Reagan's design for the RayvenOne, an affordable SLS 3D printer.

What have been some of your biggest challenges and how did you overcome them?

One of my biggest challenges was regarding the CubeRinth Maximus build. The timeframe to design and build it was 6 weeks. It’s the largest, most complex thing I have engineered to date.  It involved milling, welding, electronics, and water jetting. It was also my first real experience in managing a project build, so I learned a lot about time management and flexibility in the design process.  I had some great mentors throughout the process, especially Galen Wilson from Local Motors, who taught me a great deal about structural engineering, metal work and project management. As this is a one of kind piece, there were no examples or plans I could reference. There were many times we did not know how something was going to work; that meant that changes happened on the fly. I will say that Fusion 360 makes it much easier to work in that environment.

With the Local Motors conference table I again was working in a compressed time frame.  I designed it during a hackathon in which I had 8 hours to present a design to the judges. The one thing that helped me the most was knowing how to use the program well because I could optimize my concept to be made in the shortest amount of time possible. In both of these challenges, it helped to be flexible, patient, and keep the goal in mind, as well as ask lots of questions!

Reagan designed this conference table in less than 8 hours for a hackathon hosted by Local Motors.

Where do you see yourself in twenty years?

That’s a great question.  Twenty years is a very long time, so I have no idea what I’ll be doing. But I do hope that I will be doing what I am passionate about, and running my own company, probably a company focused on engineering, design and electronics. Also, I hope to design/create/build something that changes the world.

What advice would you give to other students interested in design, 3D printing, and entrepreneurship?

The first thing is; starting is always the hardest part. Once you get going, it becomes much easier to work on your project. Next, go to a Maker Faire, and look around; you will meet a lot of people who share your interest and it will inspire you to start!  Also, I think of design as exercise, the more you practice, the better you will be at it, so use the software often. Even if you do only an hour a day for a year on your project, that would add up to 365 hours in total, which adds up to 15 straight 24-hour work days or 37 10-hour work days. That's a lot of time! We designed and built the Maximus in 6 weeks so you can do anything!

And lastly, know this ALWAYS; “What is life, without risks? What is success, without failure?” This is a quote from my book. Don't be afraid of failure. Thomas Edison said, “I have not failed. I've simply found 10,000 ways that won’t work.” I believe this. Failure is not a failed print, a glitched design, a sheet of metal scraped, or even an incorrect tolerance. Failure is giving up. So never, never give up.

Thank you, and Make On! 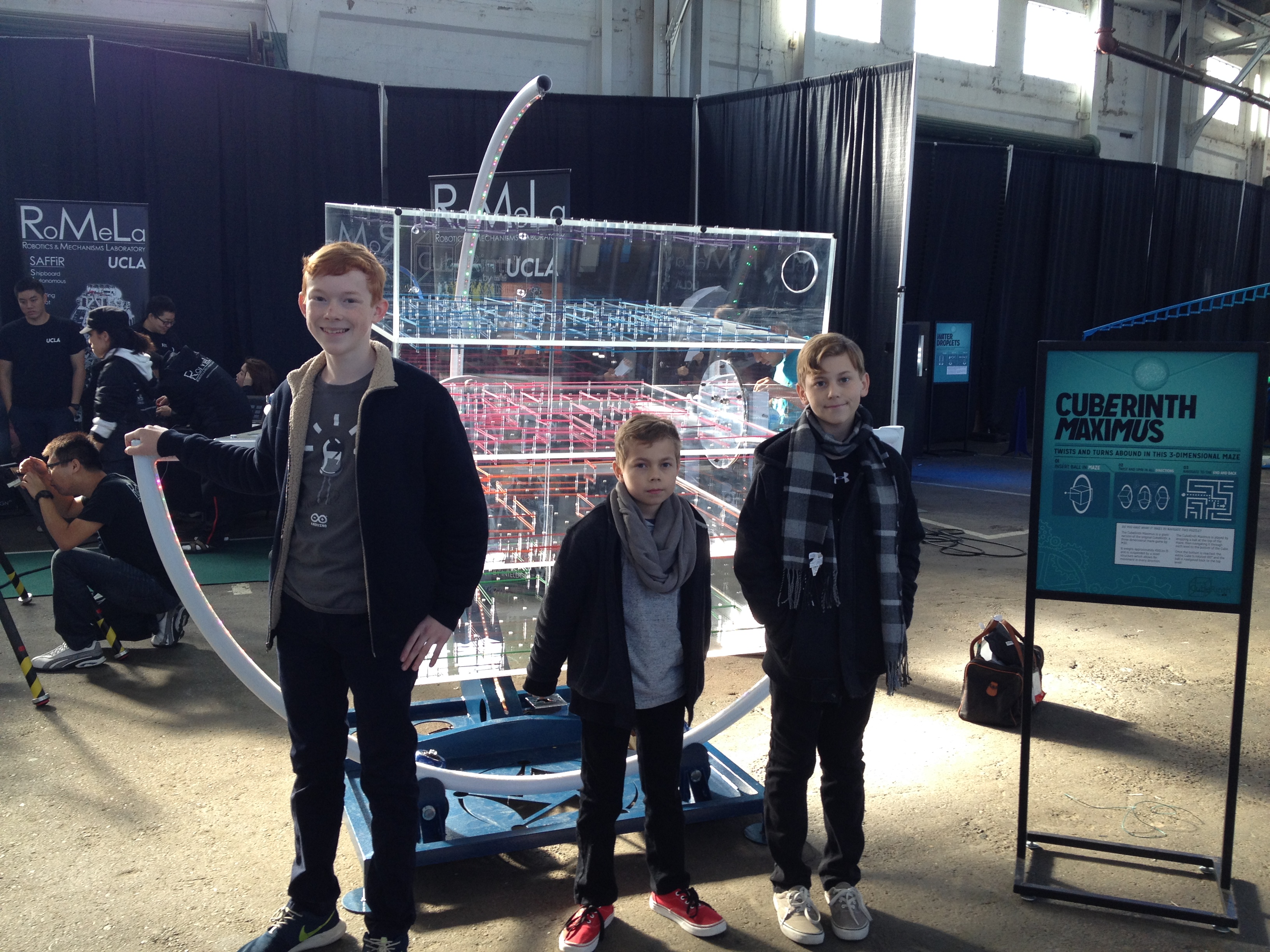 Reagan and his brothers with the Maximus at the STEAM carnival.