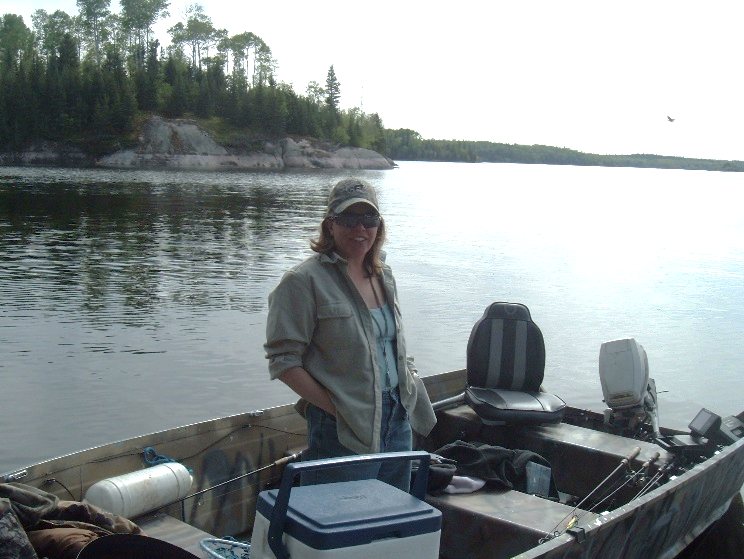 Marianna “Yana” DeMyer was born and raised overseas.  As the daughter of a Foreign Service officer with the State Department, she traveled all over Asia, the Middle East, and the United States. This childhood experience molded her as an adaptable person with a global view of Earth’s attributes; both natural and geo-political.

She attended the University of Wisconsin, and then spent 13 years as a writer and producer for news, marketing, and production companies, before becoming an entrepreneur.  In 2012 she started Roving Blue, making advanced, lightweight, portable water purification systems. Roving Blue is part of the Autodesk Entrepreneur Impact Program, which helps entrepreneurs and startups making a positive impact in the world get to market faster through access to free software, training, events, and co-marketing opportunities.

You have quite an interesting background. Tell us about yourself and your new venture into clean water and creating an advanced portable water purification product, Roving Blue.

On day one, Roving Blue was a whirlwind of activity, and it hasn’t stopped. I like to tell people that in the businesses I had worked in before, I always felt like I was shoving a large rock up a hill.  With Roving Blue, I have had all I can do to chase that boulder bouncing down that hill, and stay on my feet!

When I started out, I had one vision: Roving Blue had to be portable, it had to really do its job well, it had to be the smallest and lightest machine that could still serve 40-100 people per day, and it had to do it with the energy equivalent of a light bulb.  I wanted it to be made in America. I wanted it to be the best. There is no room in this company for “good.”  It has to be great. I also wanted it to be as affordable as possible, yet still offer our dealers and distributors a great margin for profit.  I think our very first “Model A,” launched in late 2015, has done all that and more! 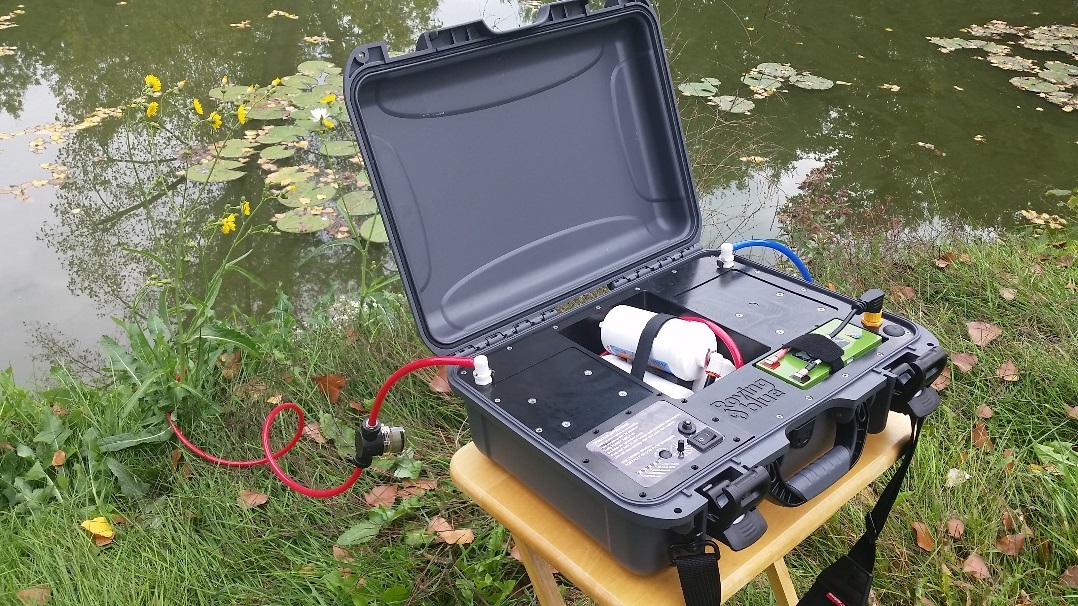 What inspired your interest in water purification? Can you tell us about some of the design advances in this market and what we can expect to see in ten years?
Early in my career I produced hunting and fishing TV shows. I am a big water drinker, and in the days when bottled water didn’t even exist (can you imagine that?), I was always facing the problem of how the heck I could pack water into all these beautiful wild places. In many cases, we’re surrounded by water, so it was frustrating that I couldn’t just drink it.

Fast forward a couple of decades, and I’m staring at this small box with some hoses and wires coming out of it, on a conference table in front of me.  My business partner (and now my husband, Jim) and I were working on one of our commercial funding projects in Green Bay, Wisconsin.  It was my first introduction to the Sanitizing power of ozone. The unit was designed to be installed under sinks in dental clinics and in doctors’ offices, to be used to wash hands and clean instruments. The ideas started blowing off in my head. One of the very first questions I asked the president of the company was “Why aren’t you making a portable water purification system out of this?” He smiled and explained that it just wasn’t their market, but that I was welcome to take the idea and run with it. Well, that’s just what I did!

What were some of the challenges you faced while designing Roving Blue?  How did using Fusion 360 help you in your design process?
Probably my biggest challenge is my lack of formal science training in water chemistry and microbiology.  Even though I hold a degree in Science-Communications, it isn’t enough in many people’s eyes. I have had two wonderful grant applications be declined due to this perceived weakness. Luckily I have managed to surround myself with very talented and highly educated professionals that I can depend on for sound advice.  Autodesk Fusion 360 enables me to sketch out my ideas visually, and helps me to communicate with our engineers and vendors, so they can see what the heck I am talking about. 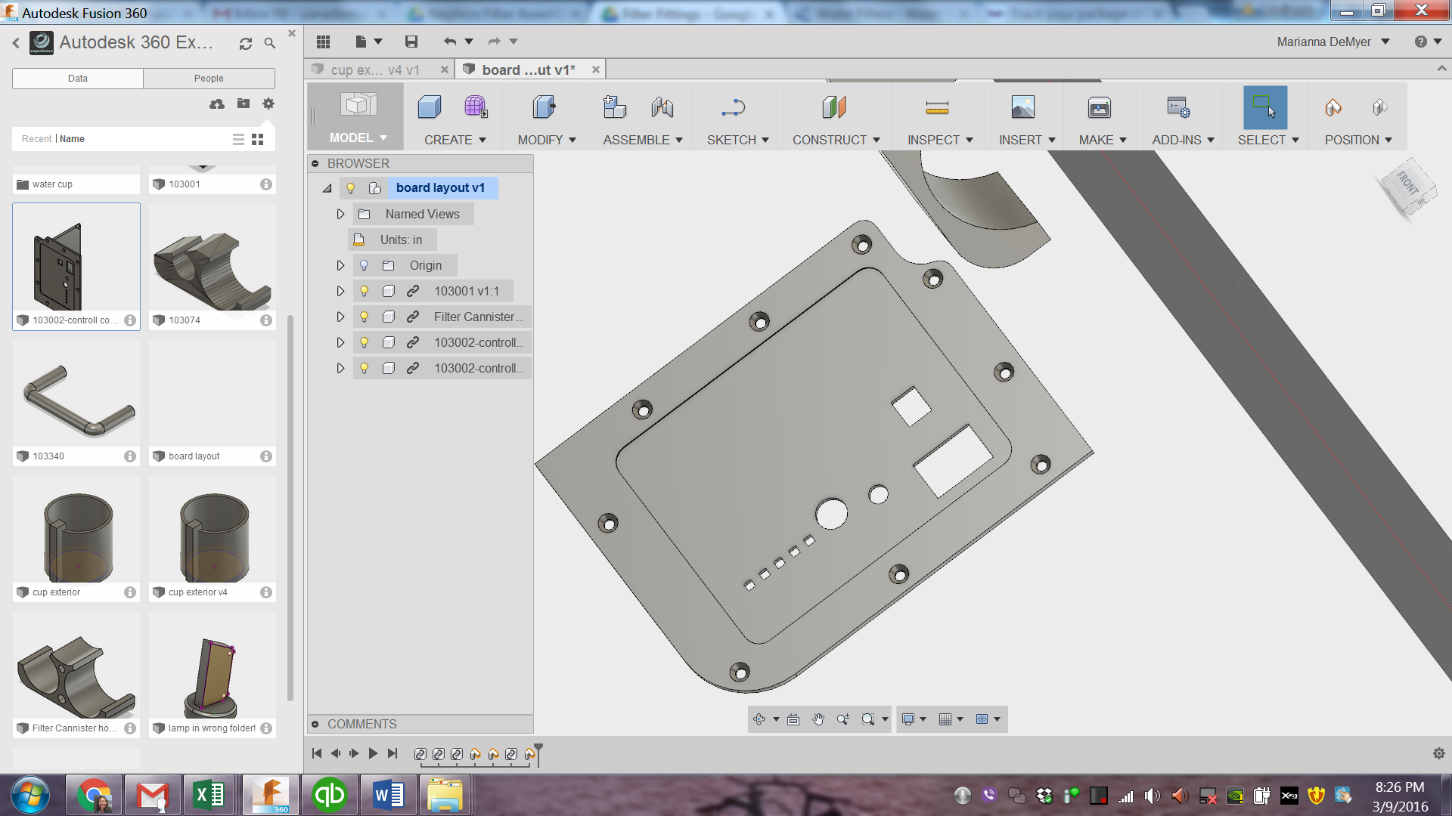 DeMeyer and her team at Roving Blue use Fusion 360 as a way to visually communicate their designs.

What aspects of your background influence you most in your work today?
I am most influenced by my parents, who always encouraged me to work hard going after my dreams.  My mother, a highly educated Filipino, to this day says, “Persistence, persistence, persistence, is the key to success.” My father, a blue-eyed upstate New Yorker of Dutch-Irish descent, taught by example. He was the embodiment of a Diplomat, which is what he was.  He was incredibly polite, dignified, and focused on doing things right the first time.  Both parents had morals of steel, and the highest ethics. So that’s what makes me approach each day with a grinding work ethic, guided by that moral compass that they instilled in me.

What would you say is your strongest skill, and how have you honed that skill over the years?
I think my strongest skill right now is my ability to clearly communicate new ideas. This is really necessary, whether you are speaking with an engineer, a potential investor, or to a multi-billion dollar corporation whose support you are seeking.  New ideas that are good ideas spark excitement. Excitement produces engagement.  Engagement breeds loyalty, which is rare and must be reciprocated.

As for how I honed this skill; I did this the way most people do: by making mistakes and failing. When you are younger, you think you are so much smarter than everyone else.  Now I have a much more humble approach to business, and life in general.

What college and career advice would you give to students interested in taking their design innovations to market?
Focus on focusing.  Don’t take no for an answer. Think big.  Seek mentorship from people who work in the industry you want to penetrate.  If you do have an innovative design, something you are truly excited about, be very careful about who you share it with, prior to doing something about protecting your idea.

Fear of failure is what holds a lot of people back. Other people’s opinions can also drag you down. I would finish by encouraging students by quoting Napoleon Hill: “Put your foot upon the neck of the fear of criticism by reaching a decision not to worry about what other people think, do, or say.”