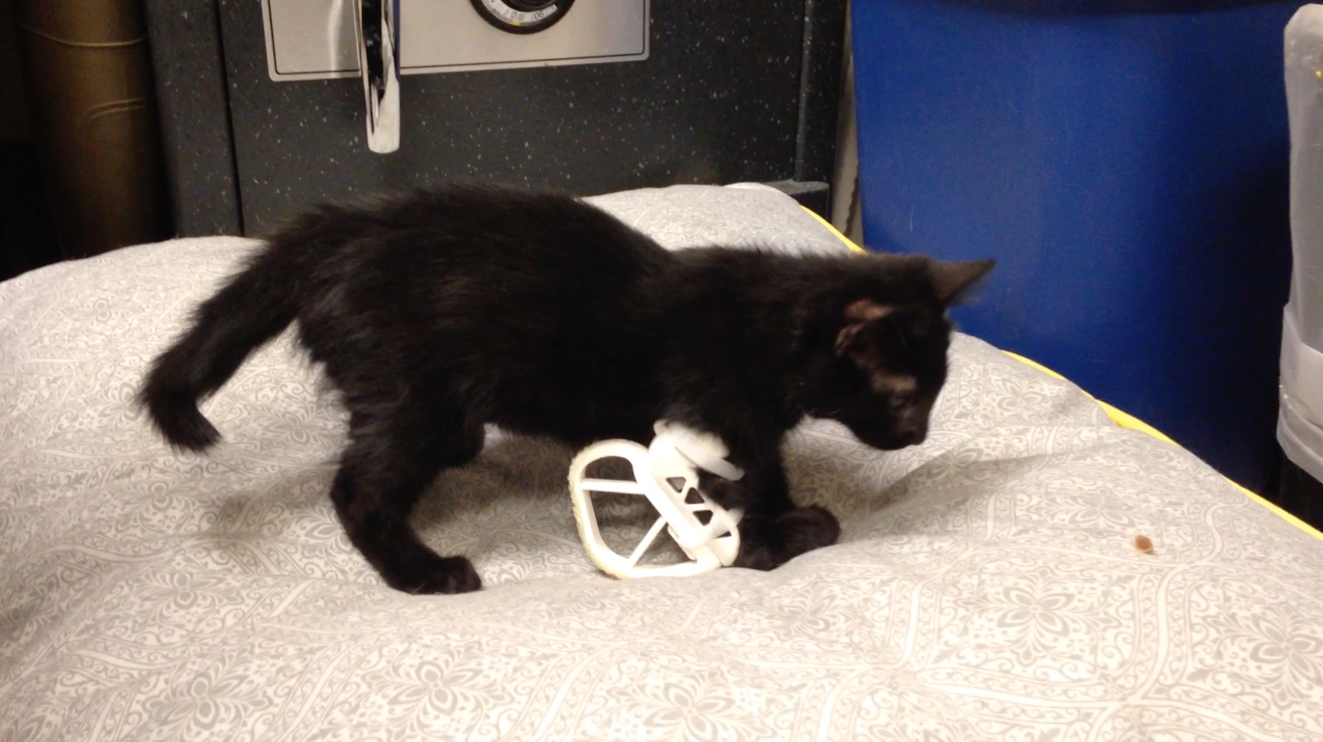 Please tell us about your background, and how you became interested in Industrial Design.

My name is Salim Fermin and I was born and raised in Venezuela. My passion is Industrial Design and the story behind my interest in this field is pretty funny.

I love to draw (characters, cars, objects, etc.) and that was one of my passions when I was a kid.  I would spend hours drawing.  As I grew up, I developed a certain taste for cars and also started to question what I wanted to do for a living. I combined my drawing skills with my attraction to cars and my first thought was Mechanical Engineering. 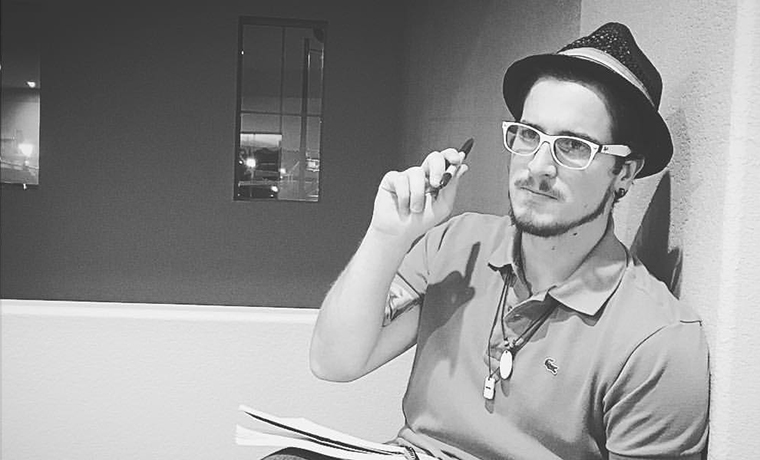 However, that didn’t work because I wanted to create the external beauty of the car, so I had to rethink what I was doing. After some research, I discovered Industrial Design, but when I started Industrial Design I realized another thing that changed my world for good.  Industrial Design is all about helping people and solving problems.  The fact is, that it is not just bolts and nuts, or cars, it actually has a lot of different branches to choose from such as user experience design, product design, medical design, and mechanical design, just to name a few, and what I chose to do, which is prosthetic design.

What made you interested in prosthetic design in particular?

You may ask, why the radical change from transportation design to prosthetic design? Because I felt, why should I draw cars, when I can actually make a difference in someone’s life with my designs?

I have always loved helping people and two things that motivated me to move to the prosthetic field were first, that I was born with microtia in my left ear and that fact made me identify with people who were missing any part of their body, and second, most of my inspiration comes from movies and TV shows like Transformers, Iron Man, and Robocop, and watching those movies made me realize that there is so much to do with prosthetics that we haven’t done yet.  There is a lot to change, different perspectives on how to look at it. I have a strong desire to be part of this new revolution that is getting bigger each day. And as I said before, helping people is what is going to make the struggle worth it.

How did you get introduced to Fusion 360, and what made it your tool of choice for prosthetic design?

A dear friend of mine called Jason Belaire; the Vice-President of the Industrial Design Society of America (IDSA), introduced me to Fusion 360. At the first I didn’t understand it that much, so I continued using my older 3D software.

Then, in April 2016 I attended the IDSA Western Conference, and I saw a professional using the software in one of the presentations, and he made it look easy enough for me to try it out at home and start messing around with it. At around the same time, the opportunity of working with a kitten named Sonic who needed a prosthetic limb came out, so I had to make the 3D models for him soon after the conference. I started by using my other 3D software, and it was hard to make a nice and coherent prosthetic. So I thought that this might be a good chance to give Fusion 360 a try and it actually made my life easier.  After some hours watching tutorials, and hitting a wall a few times, I finally got the hang of it. It made my life way easier not only because it is user friendly, but it also possesses tools that my other 3D software doesn’t have that made this project easy to handle. 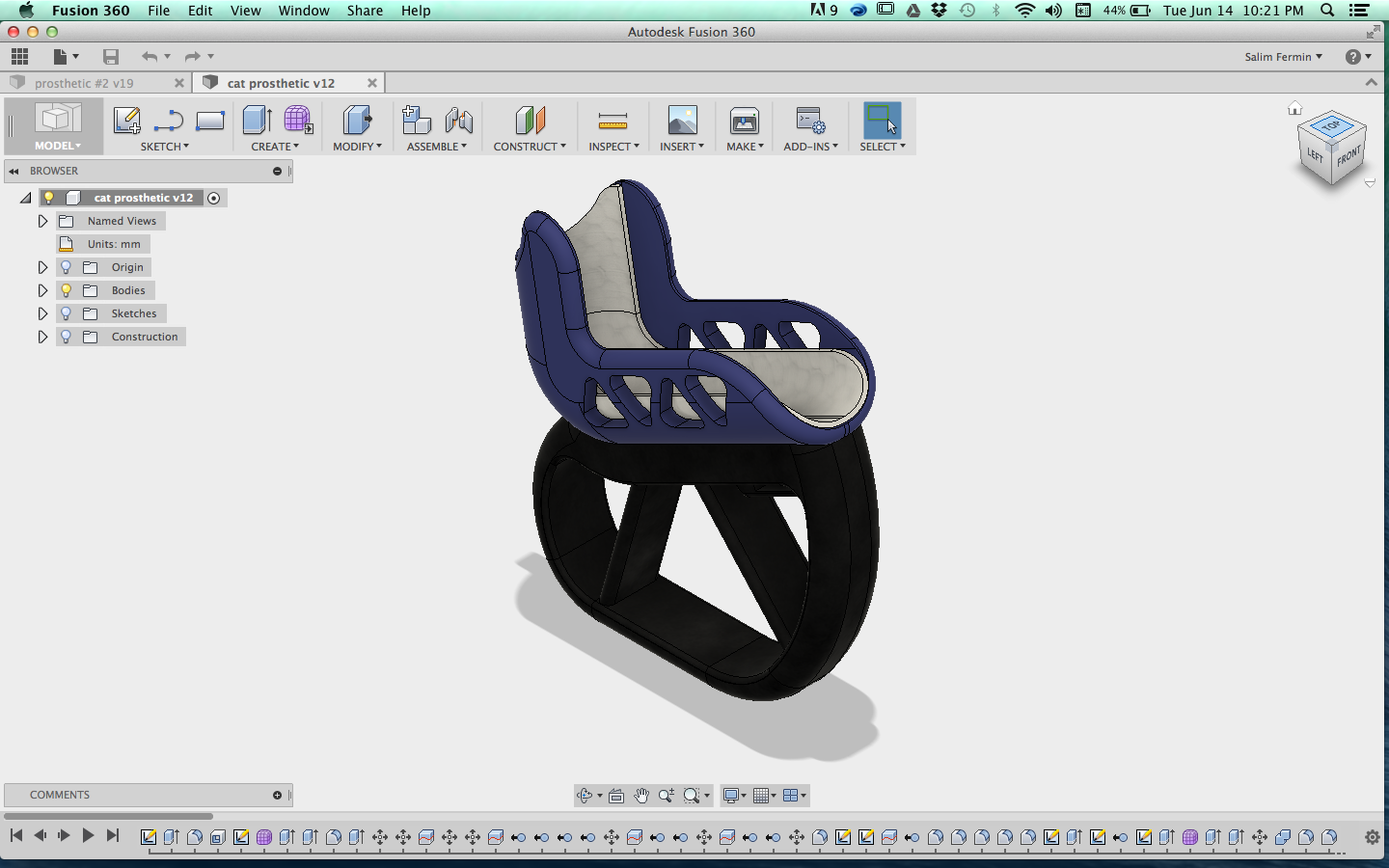 Prosthetic design in Fusion 360 designed for a kitten named Sonic.

Tell us about Sonic the kitten and how you got involved in that project.

It all started with Gregg Harvey (Professor at The Art Institute of Colorado) and a project he had for a sculpture class to make a cat statue for the Denver Animal Shelter. In one of his visits to the facility, he stumbled upon Sonic, a four-month-old kitten that was born with axial hemimelia, a deformity in its right leg that requires a prosthetic limb to walk properly. While talking with the veterinarians, he suggested that his students could help Sonic by creating a prosthesis for him with the help of 3D printing.

Around the time Gregg learned about Sonic, we both attended the IDSA (Industrial Design Society of America) conference. I happened to tell him about the strong desire I have to become a prosthetic designer. When I told him about my life goals, he mentioned that he had something that might interest me. 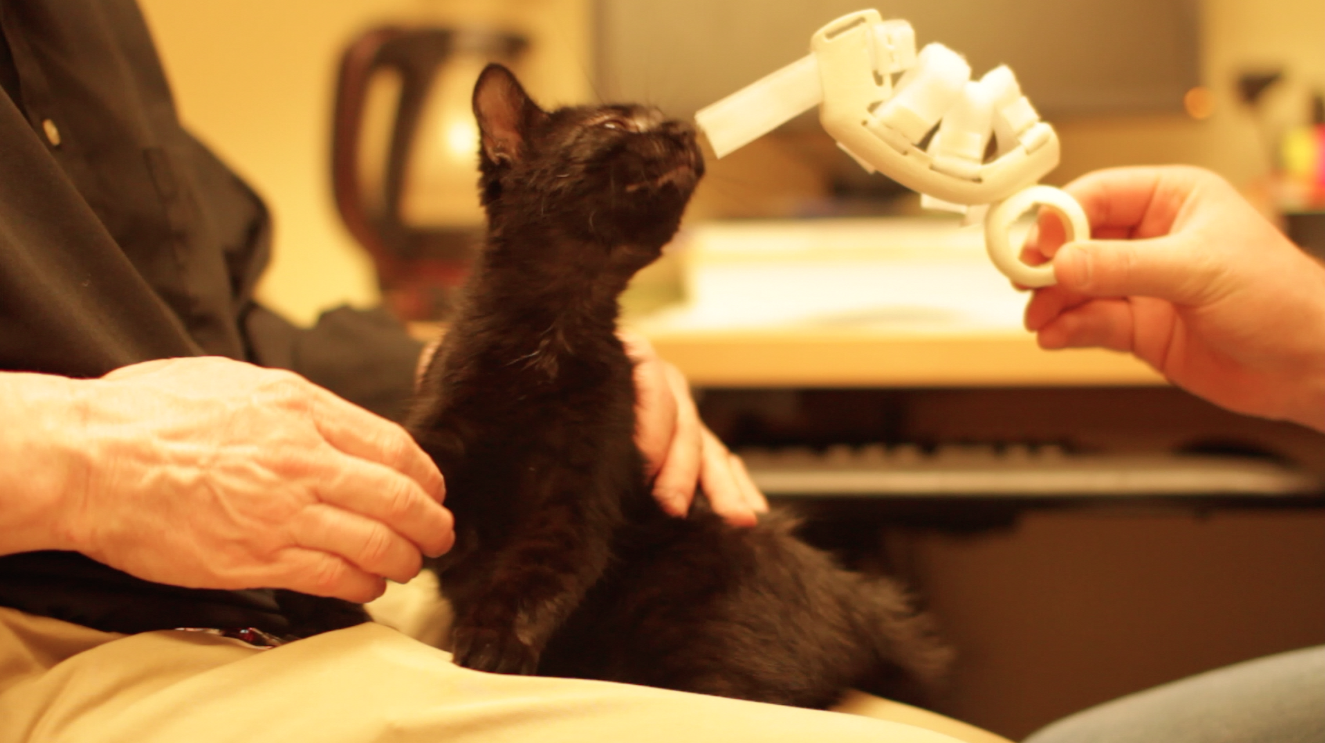 Sonic and his prosthetic.

Since April 1, I’ve been working with Gregg and Sonic non-stop in a wonderful project that hopefully is not going to stop with Sonic. I’m looking forward to helping more animals who can benefit from my 3D design skills. I consider myself lucky to be the one who Gregg chose to help Sonic.

What was your design process for building the prosthetic?

The project started by doing some research on other cases of animals with leg problems similar to Sonic. We learned this is not very common, as there are about just two to three cases to reference. The first day we went to the shelter, we took measurements of Sonic’s legs and created a cast with a flexible metal mesh. Then we started thinking about how to solve the problem while sketching our ideas on paper and in Autodesk SketchBook. I then created a 3D model in Autodesk Fusion 360 and proceeded to print the model with a 3D printer. We need to make one prosthetic per week since he is still a growing kitten. 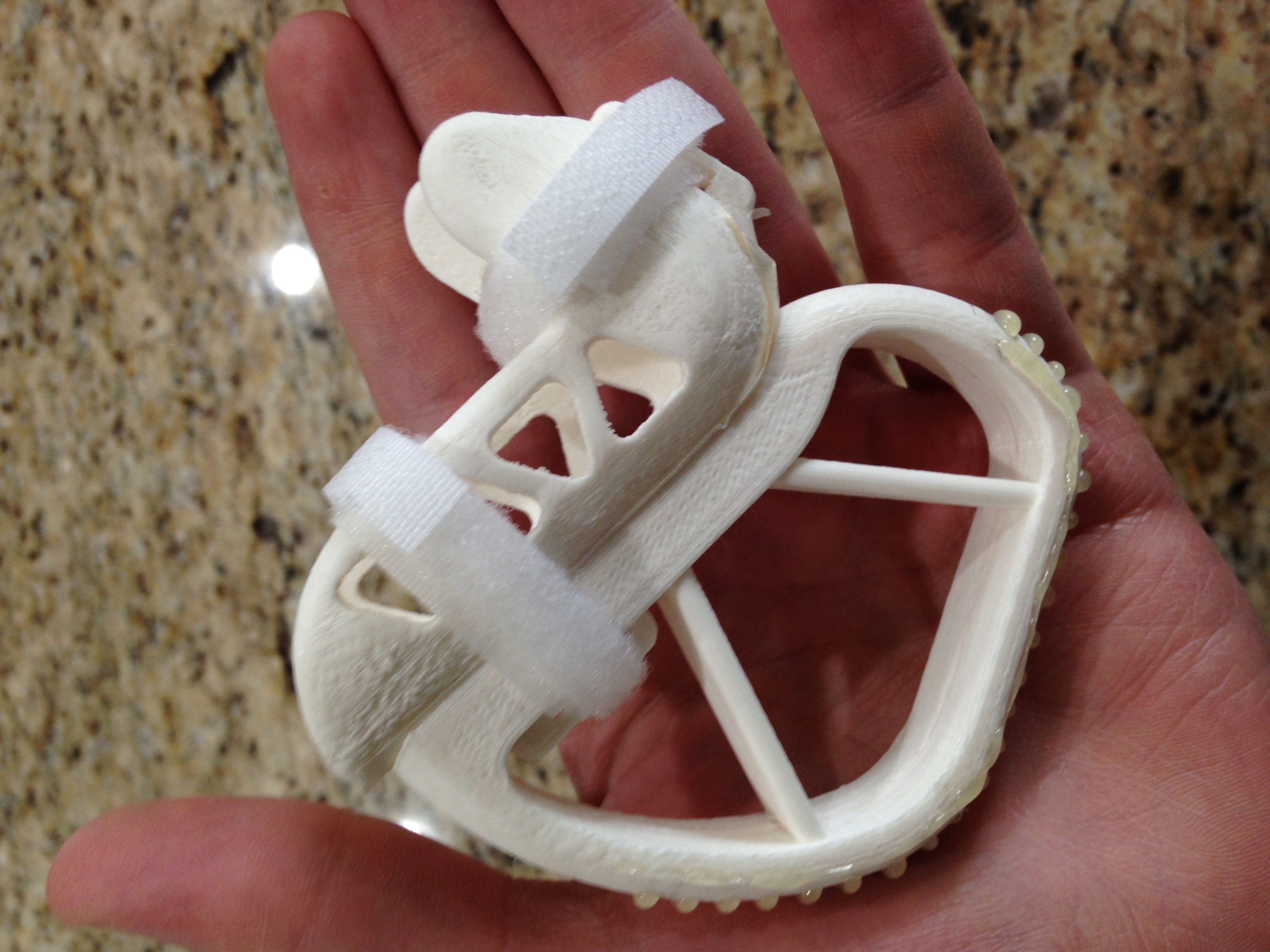 Until Sonic reaches his full size, Salim and team will 3D print his prosthetic every week.

After Sonic reaches his adult size, we are going to create a final prosthetic. This will probably be made out of carbon fiber and some rubber for the base of the prosthetic so it can have traction and a bit of cushioning while he walks.

Sonic hasn’t been adopted yet but we’ve just learned that he has passed behavior tests and progressed in physical therapy to be available for adoption. I’ll continue to work with him even after adoption until the final prosthetic is completed.

What does this project mean to you, and what were some of the challenges you faced with the project?

This project means everything to me, as it’s my first step into the world I want to enter: the prosthetic field. I want to be able to help not only animals but also people with my designs. This project turned out to be harder than I thought and it has been a wonderful challenge for me. With an animal, you cannot immediately tell whether they like it or not, as you need to interpret what the animal is saying with their behavior. This complicates things to a whole other level. After all this work and spending time with Sonic, I can tell you there is no better reward at the end than seeing this little buddy Sonic, walking around better than how he walks now. That feeling is what keeps me running and busy everyday behind my computer creating things that animals or human beings can use to improve their lives.

This is a concept wrench I’m working on for people without hands that I have in development. My design process starts with a piece of paper and a pencil and finding shapes, ideas, and functions that I think would work. 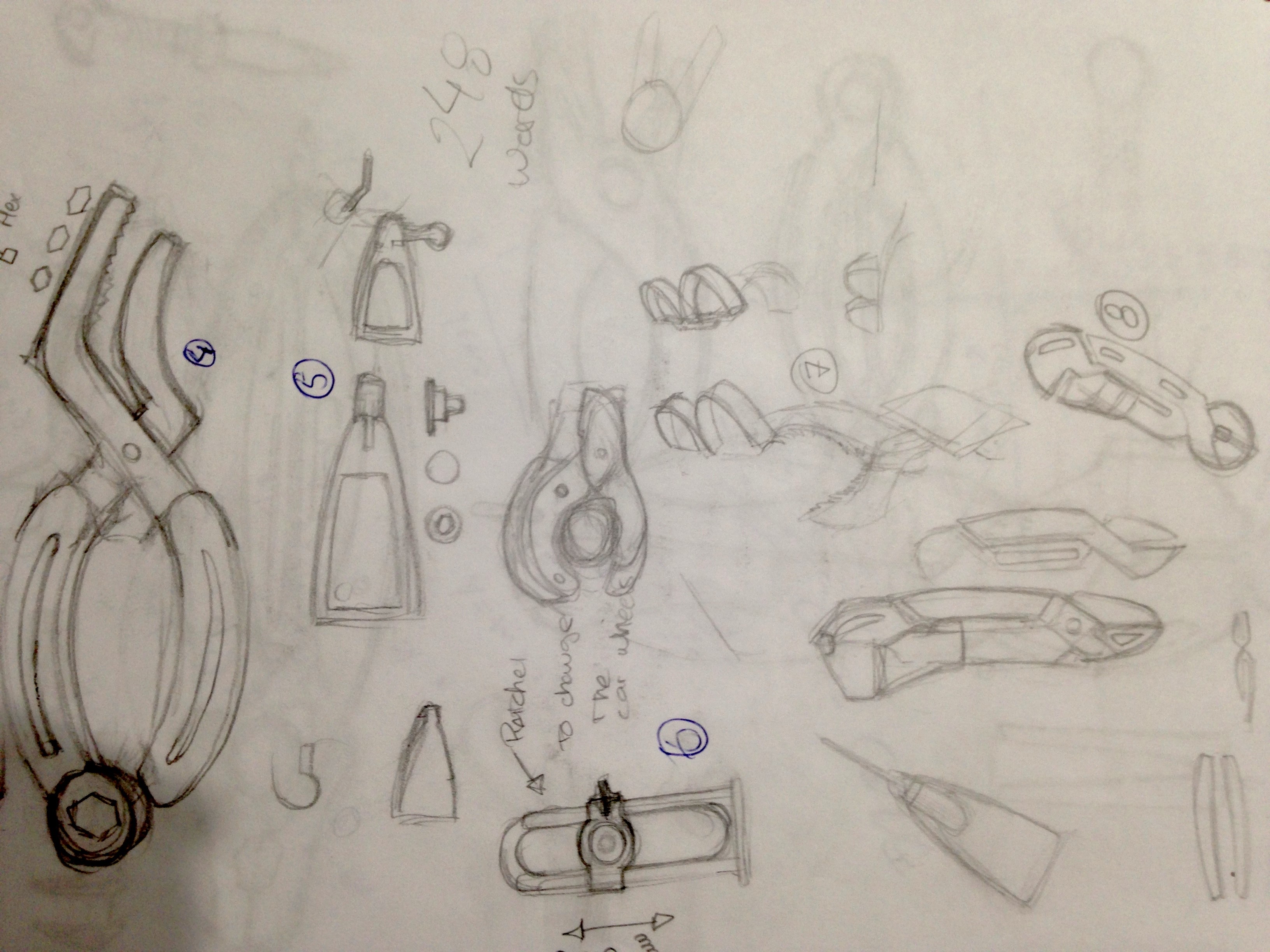 Simple concept sketches for a wrench for people with no hands.

After I’m done with these ugly drawings that only make sense to me (I’m not lying) I refine those ideas, and actually start thinking how I can make them work in a more realistic sense. 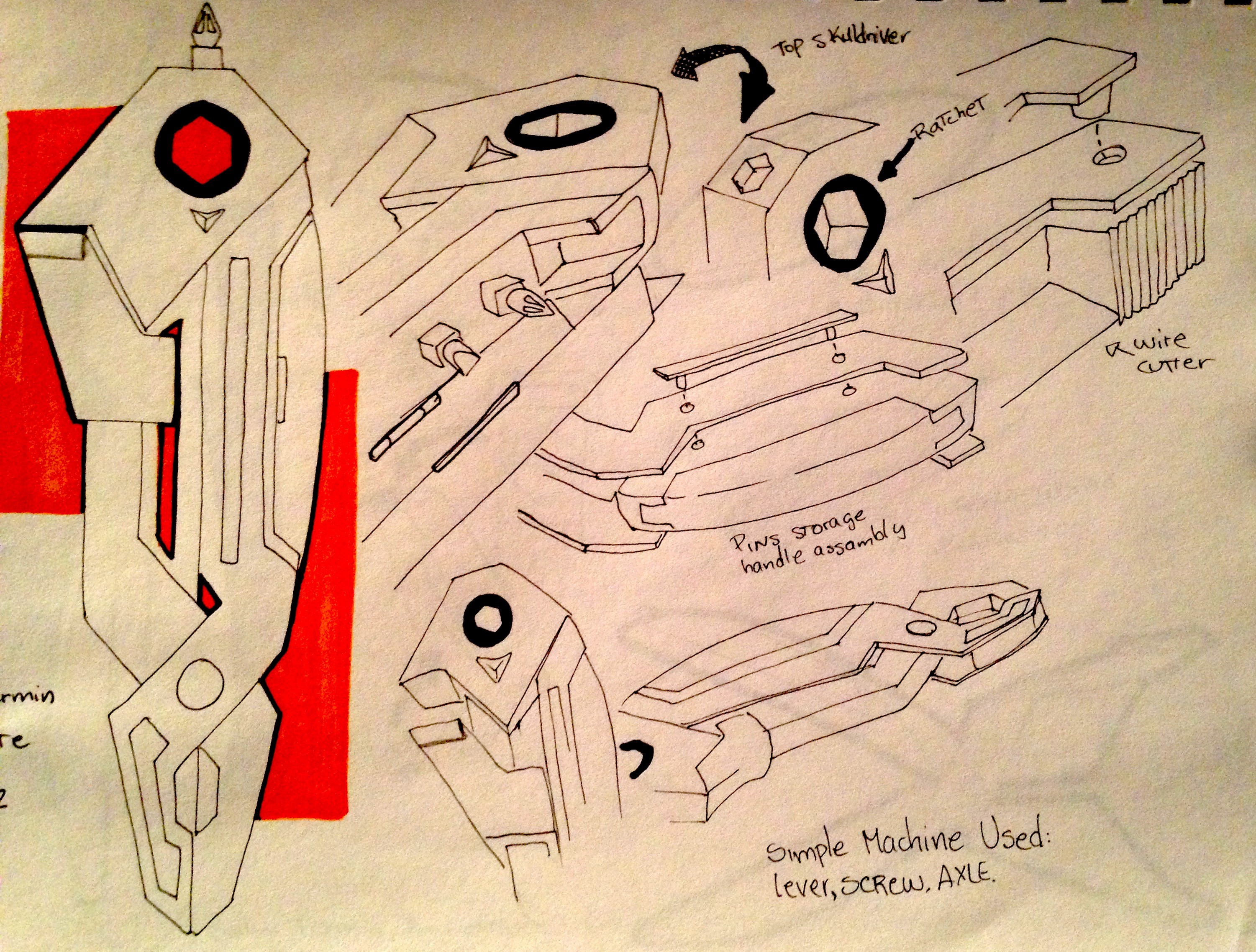 Refined concept drawings for the wrench.

Then the 3D modeling comes in, and I give them life (at least on the computer) so I can see if my idea actually works or not, and if so, what do I have to change to make it better. 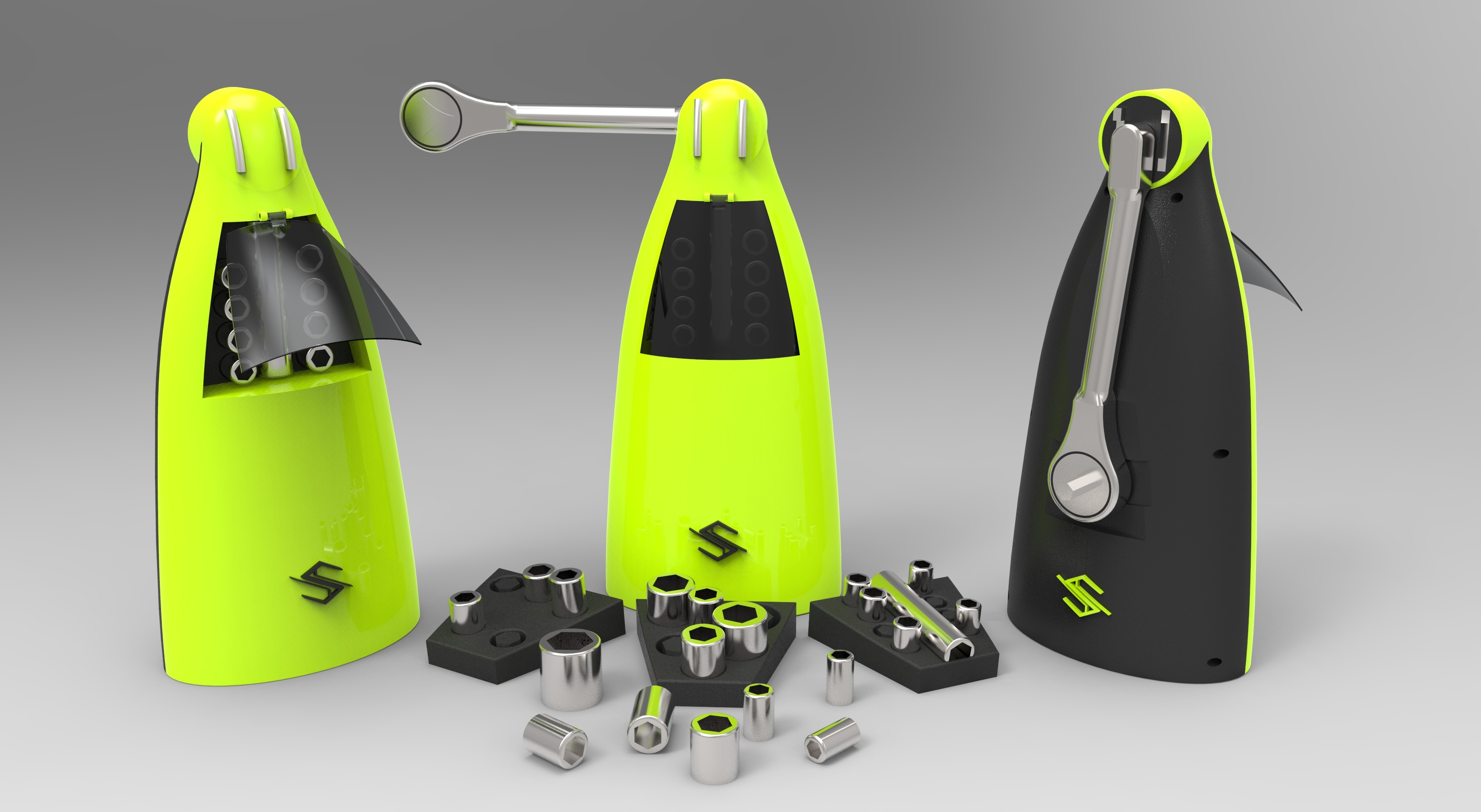 Fusion 360 model of the wrench.

Last but not least, is the prototyping phase where I can actually feel my creations and make final changes to improve the design—I make prototypes with a 3D printer or out of cardboard, paper, or whatever I can find to replicate my idea.